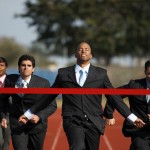 They are leaving at all levels, draining the intellectual capital of all kinds of organisations. It isn’t because there is a deficit in woman – there’s plenty of evidence that women are doing better academically than men.  So why is all this talent and potential being wasted?

Dr Ruth Sealy of Cranfield University began by reporting the good news: the Top 100 FTSE Boards met Lord Davies target of 25% women participating on Boards by 2015, that’s at least one woman on every board, not many but better than zero.

The bad news: last week business secretary Vince Cable and Lord Davies had to name and shame 28 FTSE 250 companies that still have all male boards. According to Lord Davies: “Every single company needs to address the issue of gender balance in the boardroom. […]  better balanced boards are vital to securing the future competitiveness of UK.” Vince Cable told the chairmen of errant firms: “All companies with fewer than 25% of women on their board need to take firm action now to increase female representation.”  It’s a shame Cable’s own ministerial team doesn’t meet the target.

What can be done?  Sealy argued that Executive Recruitment firms could do more to reach and attract female candidates; there’s poor talent management and narrow or blocked internal promotion prospects for women, so you have to leave if you want to progress.  She named organisational politics: the ‘tournament model’ where ‘loudest voices and sharpest elbows’ get ahead.  Then there are gendered stereotypes, there’s a choice to be made between projecting an image of likeability or competence. Though male colleagues are celebrated for having ‘soft skills’ as well as ability, if you are a woman it seems you can’t show both.

This last point in particular was recognised by the women managers from the banking sector who’d joined us.   At the end of the day the advice to other women from these managers (one at a very senior level) was “Be yourself”.

That’s fine and dandy, but what does it mean?

Identities that we believe are freely chosen can be nothing more than a brittle shell, or a prison. We surrender identities to fit in and end up living too small.  I’ve coached women who didn’t like what they had become; who felt they had ‘sold out’; women who sought coaching to explore excluded aspects of their identities, parts of themselves that had been driven deep underground.

Like all the best CPD events I left with plenty of questions to ponder; here’s a few:

Now the questions are ‘out there’ I can see this isn’t  just about  ‘women’s issues’ I know plenty of men facing similar challenges and dilemmas, which raises a whole new set of questions ….

I’d love to hear your experiences and thoughts – so please leave your comments.